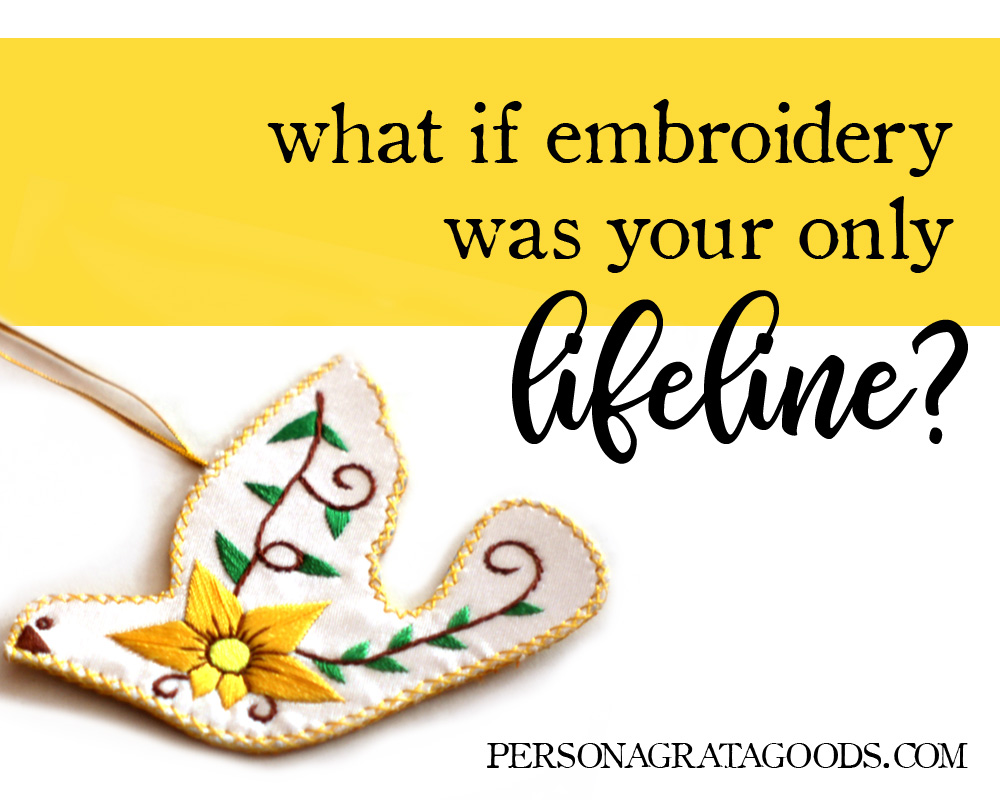 Sometimes embroidery is about more than just art. For women in the “DX” region of northwest China, embroidery is a lifeline. Here, women struggle. They’re part of an ethnic minority in a very isolated region. Few jobs are available, so men go far afield to work, leaving their families alone. The poverty in this region is some of the worst in China.

But poverty is not the worst obstacle they face. Recently, the government has been sending people from this minority group to “re-education” camps, where they’re pressured to give up their religion or else face torture. For women who have been imprisoned, the outlook is bleak. Reports from those who have made it through the camps say that young women are being raped daily by soldiers in the camps and could be killed if they resist.

Their language was once only a spoken language. A writing system has been developed, but most are still not aware of it. Some in DX understand spoken Mandarin, but many have only had one year of schooling and find it difficult to learn Chinese.

Yet…there’s hope. You can be a part of encouraging some of these women. A non-profit has been started to employ DX women in their traditional crafts of embroidery and knitting. The goal? To give them sense of accomplishment and self-esteem, exposing them to God’s love in place of hopelessness and abandonment.

One embroider says she sleeps better at night after a day of embroidering. Another woman feels a purpose & a plan for her days since starting the project. One of the woman’s sons comes home & totals up his mother’s earnings, excited at what she can buy with the money while simultaneously practicing math skills!

As one of this non-profit’s US partners, we’re excited to share with you the lovely Christmas ornaments embroidered and sewn by these precious women. Through December 31st, all snowflake and dove ornaments will be shipped for free to addresses in the lower 48 states.